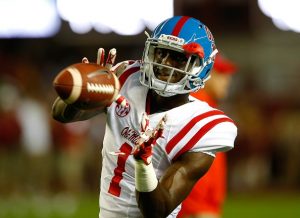 Is there no sure thing wide out in the 2016 NFL Draft?

Bob McGinn of the Milwaukee Journal has been spreading some awesome nuggets like always, and yesterday he broke down what NFL scouts were saying about quarterbacks in the draft.  Today he broke down the wide receivers and he said the NFL teams are not very impressed with the Crop. NFL scouts claim there is no sure thing in the 2016 NFL Draft.

This year, there might not be a wide receiver in the first round. Several personnel men said there isn’t a legitimate No. 1 receiver.

“It’s just a bad group,” an NFC personnel director said. “There’s not one sure thing.”

The Journal Sentinel asked 19 scouts this month to rank their favorite wide receivers from 1 to 5. A first-place vote was worth five points, a second was worth four and so on.

After that, there’s a gap to Michael Thomas (17), Tyler Boyd (16) and Sterling Shepard (13). Two players, Braxton Miller and Keyarris Garrett, each had one point.

I personally have LaQuon Treadwell as the number one, followed by Corey Coleman, Josh Doctson, Sterling Shepard and Will Fuller.