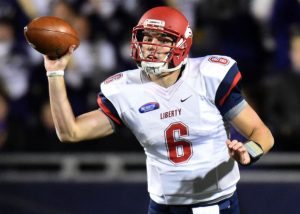 Does Liberty QB Josh Woodrum think he is better than everything?

Bob McGinn does a great job at breaking down NFL prospects, and he talks heavily with NFL scouts. Every year he writes a piece on players in the NFL Draft, and in his breakdown of the quarterbacks in the Draft, McGinn posted a very interesting article about small school quarterback Josh Woodrum.  Many feel Woodrum will be a very good quarterback but he is projected to fall to the later rounds.  Here is what the excerpt said about the Liberty gunslinger.

JOSH WOODRUM, Liberty (6-3, 228, 4.77, 5-6): Four-year starter with passer rating of 94.1 and Wonderlic of 32. “More sizzle than substance,” said one scout. “He’s got arm strength, quick release, he’s athletic. But something is missing. His accuracy is inconsistent. He doesn’t always play smart. He kind of thinks he’s better than everything. I never feel he’s in complete control of the game.” From Roanoke, Va.

That is kind of harsh, because I have heard that his teammates and his coaching staff think the world of him.  I was told by an unnamed player that Woodrum is a leader, he wants to win, and he works extremely hard to be great.  I have talked to NFL scouts regarding him as well, and all I hear is he is a late round pick with good upside.  The comments above are a bit harsh in my opinion.