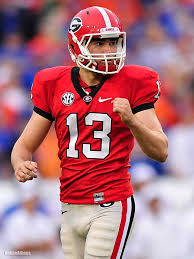 Getting to work with the children of ESP (Extra Special People) and attend ESP’s annual pageant as an escort for some of the young children. Also I was lucky enough to visit Camp Sunshine a few times and put a smile on the young children at the Camp, playing football and dodgeball with them. These kids have impacted my outlook on life more than ever, and I am blessed to have had those opportunities.

Financial Modeling by far, which is a class that teaches how to use excel to calculate financial and accounting problems using real life situations. Having a Mac did not help either, since Excel is not the friendliest for Mac users compared to Windows users.

I am from Coral Springs, Florida originally. Moved to Athens, Georgia in June 2012 then my parents ended up moving to Athens too so they could attend every game.

My Dad Mark because he supports my brothers and I with anything we decide to do. Although he always joked about wanting at least 1 of his 4 sons to play football, he never pressured me, so I ended up giving it a try in 6th grade and fell in love with the sport. I would guess his game attendance in the 11 years of my football career is around 99%. He is also a children’s pastor, and baptized me when I was younger. I admire him for taking charge of my 3 brothers and I from a young age to now.

Since I learned to walk, I was playing soccer or at least trying to because my 3 older brothers played and I enjoy competing with them. In Middle School I ran the 100 meter hurdles and competed in the high jump. Then freshman year in high school I got bored during the Spring since football was slowing down and began excel at Men’s Indoor Volleyball. The sport came natural since I grew up playing it at the beach.

During my 3 years of Coral Springs Charger’s Youth Football I terrorized opposing teams offenses as a defensive end. I made the All Star team for defensive end and they noticed I could kick at practice. It’s ironic because now I am kicker that can tackle, and not a Defensive End that can kick.

Mental and physical toughness, competitiveness, reliability under pressure (clutch), and I get the ball up quick on field goals, which makes it difficult for other teams to block. The height does not take any distance off my kicks either, since I hit a 60 yarder as a high school senior and a 57 yarder against Tennessee in Neyland Stadium, along with a 42 yard game winner in overtime. As an athletic kicker, I averaged 28 yards per carry and a decent amount of tackles in college.

On kickoff, I watch if the other team ever blocks kickers, so I can be more aware if they think they are going to get a cheap shot on me. Also I take a look at the off returner and see if there is a pattern in his initial movement to see if we can judge a sideline or field return before the main returner even catches the ball. On field goal, I try not to watch other teams film because I do not want to change what I do to try and accommodate my get off time for a fast edge rusher or the height on my kicks for a good blocker in the gap. For field goals it comes down to trusting my snapper and holder to do their job, which makes my job a lot easier.

Odell Beckham, he was a freakishly good receiver and kick returner at LSU and still is incredible in the NFL. He was dangerous on the field since he is so shifty and has great hands to compliment his speed. He also does jaw dropping things on the field, for example I had a kickoff against LSU that was going to be out of the end zone, but instead he did a one handed windmill catch then took a knee.

I would compare the way I play to Sebastian Janikowski because we both have the big powerful leg and can hit the long ball, along with being extremely accurate and un-phased by high pressure, 4th quarter, situations.

I always wanted to be the best at everything growing up as a child, and still do. Coming to college really opened my eyes, since every player is elite at their position, and I was no longer the biggest or fastest like youth league and high school. I had to swallow the fact that I was a kicker and needed to be the best kicker I could be and not worry if a linebacker was bench pressing more than me or a defensive back was faster than me in summer workouts. 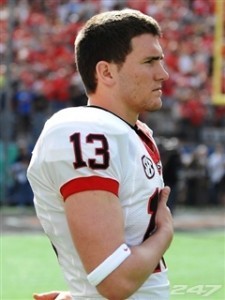 Before every game I make sure the last song I listen to on my IPOD is “Your Love” by The Outfield. Its just a routine since my junior year of high school, I listened to it before our 3rd round playoff game, and had my best game ever going 3 of 3 and punting and kicking off awesome. I also pray to God and give him thanks for allowing me to play such a thrilling sport at such a high level. I also read Philippians 4:13, my favorite verse, “I can do all things through Christ who strengthens me”.

Being to obsessed with striving for perfection, since it drives me crazy sometimes. My high school teacher and coach, Chip Miller, told me before a game one time, “Do not be afraid to fail”, which really helped ease my mind at times when I become frustrated because one little thing does not go my way.

I will make you proud on and off the field. I understand I am a young rookie, but I am ready to come in and compete for the job and preferably play right away, but will work just as hard if not. I hope you are willing to give me a chance to prove to you that I am the best man for the kicking job. I thrive off pressure and will not crack in games, and I have a short term memory, which means if something does not go my way I will not fold. I feel that I am worth at least the opportunity to prove to you I am the right guy for the job and will work my tail off to improve in every aspect of my position.

Growing up I always enjoyed watching Jason Taylor play for the Miami Dolphins on Sundays. In 2006, when he got defensive player of the year, I was just starting football, and played defensive end because I looked up to Jason Taylor and his competitiveness he expressed on the field, dominating whoever lined up across from him. I am from South Florida so naturally it was easy to root for the Dolphins, and I really had no choice since my dad has been a huge Dolphins fan.

I would choose Ray Lewis, Stephen Curry, and Will Ferrell

I would buy my Parents I phones, so they can group text, and I do not have to separately tell them how my day is everyday, I can just say it once and they can both read it haha