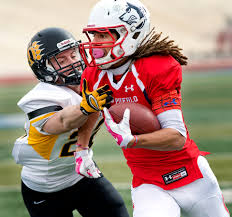 Colorado State Pueblo wide out Kieren Duncan is a beast

The coolest thing that I did was taking a local kid and taking him throughout our pre-game activities. Me and another receiver, Jarred Radebaugh, took him through the entire process from our pre-game meal, chapel, and our “pack walk” down to the field. We introduced him to all the players, gave him a tour of the campus and field, and got the players and coaches to sign a shirt and ball for him. It was his birthday and he loved it!

Probably media law and ethics. A required class for my major that was literally all lecture and notes about court cases in the media from the early 1900’s. Not fun at all and extremely tough.

Was born in the Bronx, NY but grew up down in Riverside, CA before going to high school in Goodyear, AZ.

Off the field I would have to say it’s my father. He’s just the epitome of someone who puts their family first and does whatever he can do in his power to help his children and his wife. On the field, it would have to be Derek Jeter. Being from New York my family and I are huge Yankee fans and Jeter is just the definition of a professional athlete. Players have nothing but immense respect for him, he’s a game changer and a presence on the field, he carries himself professionally and never has negative distracting off the field issues, and he’s a legend.

I played baseball growing up and didn’t even play football until about 11 years old. My mom actually thought I was better at baseball but I eventually fell in love with football and didn’t have the same passion for baseball.

I’ve played cornerback in high school but other than that I’ve pretty much always been a receiver and a returner.

I think speed is a huge thing. Running a 4.2 helps you get the vertical separation down the field. I’m also very sure handed and don’t drop the ball very often so I think being able to make the spectacular catches but also the routine ones at every depth is something that separates me.

I love watching releases and nuances in people’s route running. Disguising routes, using speed changes to your advantage, great hand combat within the first five yards, and quick feet. You can always learn something in the subtleties.

One of my own teammates from a couple of years ago, CJ Roberts who now plays for the Tampa Bay Bucs, was always the toughest DB I’ve ever faced. He’s fast, strong, and always tries to get into your head. We would always battle back and forth and it was just a blast competing with him day in and day out. 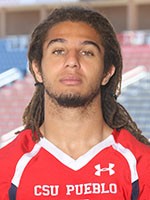 I would say Tavon Austin. I’m a smaller, faster guy similar to him. I’ve been used in the same kind of way as far as being a receiver and catching passes but also running reverses and sweeps. He also can change the game in the return game by flipping field position and making explosive plays. When I saw him get drafted I was ecstatic and knew there was a place for guys like me in the league.

It was probably my junior season. I strained my hamstring during summer workouts and kept coming back too early and reinjuring it. I missed a few games and played a lot of games in pain because I needed to. It was tough because midway through the preseason after I had re-injured it two more times I was unsure if football was what I was supposed to do. And it really took a lot of close people around me and the help of our athletic training staff to reassure me and to get the point across that if I took the time to heal and go through the rehab program and not come back before I was ready, my body would respond the correct way.

I definitely like to listen to a game day playlist. I also catch between 50-100 balls before the game starts. But I always have to have my Spider-Man compression shirt on underneath the pads. That’s a must.

I think it would be the multi-dimensional attack I can bring. I can change the game through receiving, sweeps, or in the return game and being able to be a weapon on multiple facets of the game makes a player dangerous.

“You’re getting a hard working guy who will do any and everything to help your team win. I’m just asking for a chance to prove that.”

Favorite player growing up would have to be Jerry Rice. In my opinion and many other’s he’s the best receiver to ever play the game and he did it coming out of a small school. He’s the best of the best.

Probably a purchase of a new car for my mom and then one for myself.