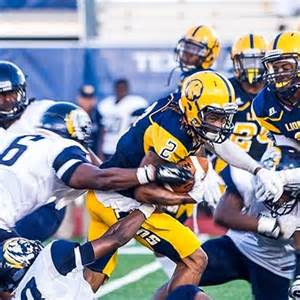 My name is Demarlon Morris

I play football at Texas A&M Commerce in Texas.

I always spend time with my church when I go back home cleaning up downstairs in the kitchen or anything they need me to do. I also give money to homeless on the street every time I’m home because it always someone in need out there.

The hardest class I ever took in college was honors math I’m more of a reading and talking person.

My role model would have to be president Barack Obama. I feel as he was able to fight threw all the adversity he had to overcome to be president and he’s also confident in himself. He has been a great leader in my opinion.

I played all 3 sports baseball, football and basketball.

I played about every skill position to play in high-school ,started at QB, played WR and RB. I was all city first team as a safety as a Jr. and Sr. year leading nation with 13 interceptions my junior year.

What I think separates me more is my instincts and ball skills. I’m always looking to be Alert and hoping ball is throw my way.

When I’m studying receivers film I look at how fast they are going on certain routes I’m watching the yards they run to eliminate routes that they run like (if I’m playing off man at 7-10 yds and they run past 5 yards two routes are eliminate the slant and quick hitch ) so it helps me to focus on route recognition early.
When studying other corners film I look at there focus and there technique so I can become better or gain more knowledge that I didn’t know. I also study how I can separate myself from others and what I can do to be different . Example: While watching corners film if their pressing and press with opposite hand or outside hand or did they close in on receiver fast enough and how well they play ball in air .I’m always trying to learn how to become better.

I would have to say a JUCO receiver named Cody Saul he played on my team and was an all American JUCO receiver when we played. Maybe Vernon Johnson as well he was with Lions last year.

I would have to say I would mock my game to Richard Sherman mixed with Patrick Peterson skill set. I say Sherman because he brings that competition and always trying to make a play also, he’s a smart player. I also say Patrick Peterson because he’s really athletic and good and can play other positions.

My biggest obstacle was having to stay strong and keep going after my dream. I had to try to make something out of myself and for my family after the separation of me from my parents at the age of 3. I found a love for the game 6 yrs later and always promised to push threw even without my parents.

My pre game ritual is praying and staying focus on making plays for my team.

My biggest strength is working hard and making plays .

My biggest weakness is not trusting what I see the first time. 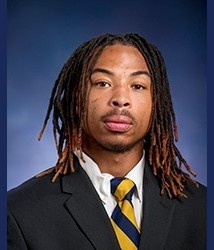 If you were a GM I would introduce myself first, than I would tell you I grew up in Chicago Illinois my whole life on the south side always stayed in school and chased my goal so that I would be able to talk to a GM one day. I’m going to Always be willing to work hard and make plays for the team and also I will be there for my teammates so I can become a better leader in anyway I can. I will respect the coaches ,the team and also the organization as well as the community and fans. Hard work pays off and that is what You will get from me.

My favorite player growing up was Larry Fitzgerald because I played receiver at the time he was always scoring and was exciting to watch each week. Devin Hester was one of my favorites as well as Deion Sanders .

The 3 people I would have dinner with is A president from 1800s, my brother who is alive and my daughter. I would choose these three people because I would like to know more about the 1800s from a leader and I chose my brother and daughter because they mean a lot to me .

The first item I buy will probably be a house for my mom and for other family members so they would have a place to go and won’t have to be on the street.