If Myles Jack falls past 45 he will collect 60,000 dollars per pick after 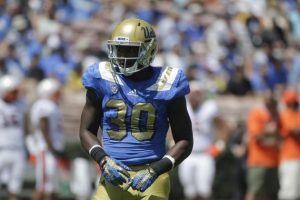 Here is how Myles Jack’s insurance works for him slipping in the Draft. Myles Jack should have been a top 10 pick in the NFL Draft, but his knee was concerning to many.  He has already fell to 32.  If he falls to 45 he will start collecting 60,000 dollars every pick after.

This is not great insurance, but he can collect up to 5 million dollars total if he keeps sliding.

Myles Jack’s loss of value insurance policy kicks in at the 45th pick. Gets paid about $60,000 per pick from then on, collects up to $5M.

Jack posted this video trying to show teams he is fine