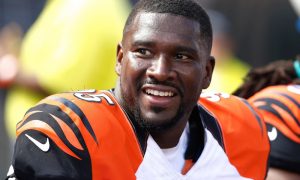 Wallace Gilberry has been signed by the Detroit Lions

The Lions have signed several solid free agents this off-season.