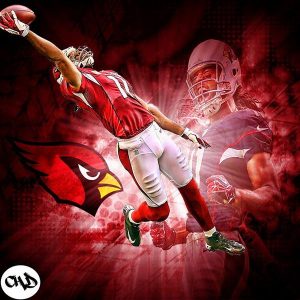 Larry Fitzgerald says as long as the Cardinals are winning and he has a good QB, he will play

How long can Larry Fitzgerald of the Cardinals play at a high level?  Well in an interview with Arizona Sports 98.7 FM, the 32 year odl wide out said he has two necessities to continue his career. They are winning and a good quarterback. Right now he has both.

“I just want to be on a contender; we’ve got a great group of guys here, we’ve got a wonderful football team that can compete at the highest level right now,” he said, via ArizonaSports.com. “I’m hoping that we can win the Super Bowl this year and it would be no questions asked.”

Fitzgerald said as long as Palmer is playing at a high level he would consider playing longer.

“I would still have to think about it and see where I was at,” he said, before linking his fate to his quarterback’s. “A lot of it’s tied to Carson (Palmer) — Carson’s playing at a high level. I don’t want to go through any other quarterback situations. It’s been great to have the stability that we have now with the big fella, he’s been playing light’s out.”

I hope Fitzgerald keeps playing, he is one of the most underrated wide outs in the game.