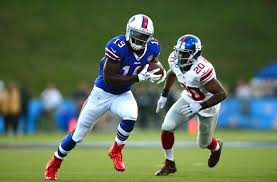 When Mike Williams the former Syracuse wide out entered the NFL he was on a mission. In 2010, he led all rookies with 65 receptions for 964 yards and 11 touchdowns.  He also set a Buccaneers franchise record for most receiving touchdowns in a single season with 11. Well he has another home now. The Buffalo, NY native was signed today by the Kansas City Chiefs to a one year deal.

Williams was drafted by the Tampa Bay Buccaneers in the fourth round (101st overall) in the 2010 NFL Draft. Williams is a bigger wide out at 6’2 and 212 pounds, and we have been hearing all off-season that the Chiefs are looking for taller wide outs.