Johnny Manziel was fired twice yesterday, First by his agent then by NIKE 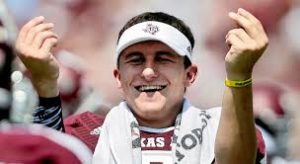 Not fun and games anymore Johnny

Some football players do not understand how great they really have it until it is taken from them.  Over the past couple years a couple players have really messed up their bright careers by making dumb decisions. A couple that come to mind are Titus Young, Justin Blackmon, Ray McDonald, Greg Hardy, Ray Rice, Josh Gordon and his teammate Johnny Manziel.

Manziel is on such a bad spiral now, he was fired twice yesterday, and he is not even on a football roster.

In addition to Nike, LeBron James’ marketing agency dumped Manziel earlier this year, and on Tuesday, Manziel’s was fired by his second agent in three months.

Maverick Carter, who runs James’ agency, said in January that they were parting ways with Manziel because the quarterback needed to focus on “personal growth.”

“We’ve decided to end our formal business relationship with Johnny,” Carter said at the time. “I will continue to support and advise him as a friend. However, because Johnny needs to focus on personal growth, the next phase of his career and because LRMR continues to expand beyond marketing, we made the mutual decision that it was best to terminate our business relationship.”

I agree with Maverick, he sounds like a very smart individual. Someone needs to beat Johnny’s butt. He needs some sense, because he is ruining his career.