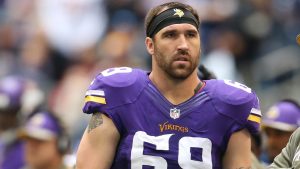 Jared Allen will retire with the Vikings

The Minnesota Vikings have signed defensive end Jared Allen to a ceremonial one-day contract to allow the four-time All-Pro to formally retire as a member of the team.

The Vikings made the announcement Thursday.

Allen spent six of his 12 seasons with the Vikings, ranking third on the franchise’s all-time list with 83½ sacks. He finished his career in the Super Bowl with Carolina after being traded there by Chicago. Kansas City drafted Allen in the fourth round out of Idaho State in 2004.