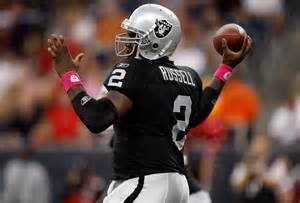 How bad do you want it in life?  That is the question, and it is one that Jamarcus Russell is trying to display.  We all remember when the Oakland Raiders drafted Russell, he had a cannon and was a beast at LSU, but he was horrible in the NFL. Well according to Sports Illustrated, Russell sent a letter to all 32 teams asking for a shot. He said he would be willing to lead their scout team for a year for free, just to learn the system.

“God makes things happen for a reason, Who’s to say? You might see me back. You never know, man. You never know. … Whatever it is — I can be a water boy and work my way into a scout team. It doesn’t matter. I’ll go play for free.”

“I am willing to lead the scout team for free for one year just to get experience in your system,” Russell wrote in a letter to Dallas Cowboys owner Jerry Jones, according to Sports Illustrated.

“I know that my name does not carry much weight in the NFL right now, but I am more than the image that others have bestowed on me,” Russell wrote. “I’ve been labeled as a bust, I have been labeled as lazy and I have been the targets of many insults by the media. The blame for any negative press that I’ve received rested squarely on my shoulders. … My tribulations have humbled me. I am a better man because of my struggles, and I simply desire an opportunity [to] redeem myself. I do not want my legacy to be a trail of unfulfilled dreams and missed opportunities.”