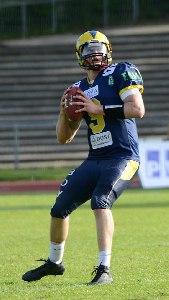 Former Concordia quarterback Griffin Neal has been playing football in Germany since his college days, and we are learning now he has signed a contract in the NFL.

After landing a workout at the Pro Day of Tulane which was rained out and moved to the Saints indoor facility, the former Concordia quarterback lit up the show. Sean Payton, General Manager Mickey Loomis, Offensive Coordinator Pete Carmichael, as well as other team personnel, approached Neal and offered him a contract.

The former GFL 2 football star landed a 3 year rookie deal with the Saints and is now the third German Football League player to land a deal.  Neal played last season for Hildesheim Invaders. Neal is a 6’4, 225 pound quarterback with a strong arm. He threw 30 touchdowns last season averaging 233.4 yards a game.