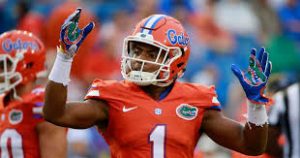 Could Vernon Hargreaves fall in the NFL Draft after his failed drug test at the Combine?

It happens every year. A player projected to be a top prospect messes up and fails the drug test at the NFL Scouting Combine. This year’s bonehead award goes to former Florida Gators cornerback Vernon Hargreaves.

According to Pro Football Talk, Adam Schefter of NFL Network and Ian Rapoport of NFL Media reported on Sunday that Florida cornerback Vernon Hargreaves failed a drug test in Indianapolis.

There were rumors that the SEC’s top cornerback failed a drug test on Reddit.com and this now confirms it. Huge blow for Hargreaves.

Mike Florio of Pro Football Talk is now reporting that is not true:

And, of course, both tweets came from impostor accounts, which posted the information on April 17.

The truth is that Hargreaves did not fail the Scouting Combine drug test. Per a source with knowledge of the situation, Hargreaves has received no information suggesting a positive test.