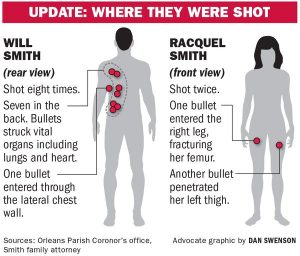 A fully-loaded 9 mm handgun was found inside slain NFL player Will Smith’s car during a search conducted by police according to New Orleans Police Department.  A fully-loaded revolver was also found inside the suspected gunman’s car, police said.

However, police said no bullet casings were found inside either vehicle and there was no ballistic evidence to show that either weapon was fired during the incident.

Will Smith was shot 8 times in his back, which makes you wonder how immediate of a threat he was at the moment he was shot.  The only avenue I think Will Smith would be able to contest is to say that Will Smith was reaching for his gun and that is when Hayes began firing the rounds. Besides that I cannot imagine how this will sit in the court of law considering his wife and two other passengers were in Smith’s vehicle at the time of the shooting.

A witness says she saw former NFL player Will Smith with a gun in his hand before he was shot dead over the weekend, according to the defense attorney in the case.