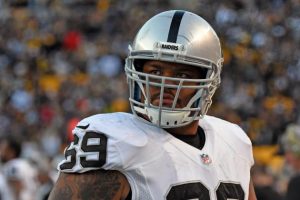 On Monday, police authorities said free-agent offensive lineman Khalif Barnes was arrested on suspicion of drunken driving, according to  Kimberly Veklerov of the San Francisco Chronicle.

Barnes, 33, was arrested and taken to Santa Rita Jail, where he was cited and released after he sobered up, said Sgt. J.D. Nelson of the Alameda County Sheriff’s Office.

The records show it occurred Sunday or Monday. Alameda County prosecutors will have to decide whether to charge Barnes.

A second-round pick in 2005, Barnes spent the last seven seasons with the Oakland Raiders after spending the first four years of his career with the Jacksonville Jaguars.