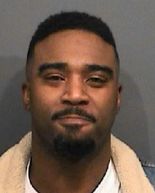 Westerville Police started following Smith, 31, at 2:38 a.m. after an officer noticed his Lincoln did not have a front license plate, according to a police report.

According to cops in Westerville, OH, Smith was weaving in lanes in his Lincoln MKZ and when officers pulled him over, they noticed his eyes were glassy and his speech was slurred.