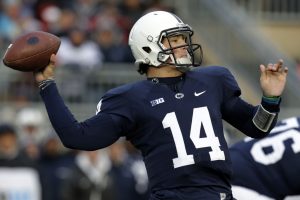 Christian Hackenberg of Penn State is a good quarterback, but should he be talked about as a first round pick?

Jon Gruden knows a thing or two about quarterbacks, and after hosting Penn State quarterback Christian Hackenberg for his Gruden’s Camp, he came away really impressed.

Gruden is shocked that Hackenberg is not being talked about as one of the top quarterbacks in the NFL Draft. Here is what he had to say:

The biggest surprise to me on Hackenberg is that no one is really talking about him in the first round. This was the No. 1 prospect in the nation a few years ago and someone who showed during his freshman year he could produce at a high level in a true NFL-style offense. What he showed during that first year at Penn State — before the coaching change, before the system change, before all the things that derailed him — would be enough for me to take this guy early. This man can run a 4.7-second 40, he is tough as hell and he works relentlessly. He just has to get in the right system with the right people and refocus on the small details.

What do you think? Is Hackenberg a first round pick?  I feel he should be a mid round players.