#Eagles think that Carson Wentz is better than Jared Goff 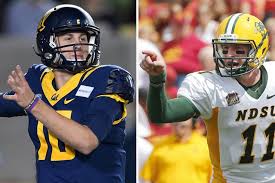 There is great debate right now over who is the best quarterback in the NFL Draft, and while Mike Mayock feels it is Carson Wentz, another person is stepping up and stating that Wentz is the best in the draft. That person is the head coach of the Philadelphia Eagles Doug Pederson.

The Eagles traveled the country to scout the top quarterback prospects this spring. They can cross one off their draft board after the Los Angeles Rams acquired the No. 1 pick to likely select either California’s Jared Goff or North Dakota State’s Carson Wentz.

But the quarterback who does not get picked by the Rams could be a possibility for the Eagles because coach Doug Pederson said that both Goff and Wentz can become franchise quarterbacks, and there’s not much separation in the team’s evaluations of the players.

“Pretty even in my opinion,” Pederson said, per Philly.com. “From all the physical tools, both of them are extremely gifted there. Good arm strength, mobility. Obviously Carson’s a little bigger, maybe a little better athlete right now. But there’s not much separating those two.”

It sounds like the Eagles have Wentz rated higher than Goff. I wonder if the Eagles will in fact trade up to land their future signal caller.