Is Clemson CB Mackenzie Alexander too hard to deal with off the field? Falling out the first round? 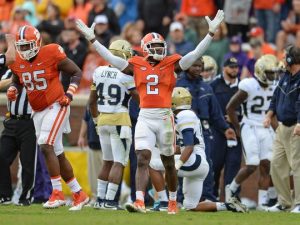 Clemson CB Mackensie Alexander is a playmaker, teams will pass on him and I hope my team takes him

I am very high on Mackenzie Alexander and I feel he is the top corner in this entire draft, but NFL teams are reportedly not fond of his character off the field.  You have to remember players like Marcus Peters who fell in the draft because of character.  Remember the Honey Badger?  Both of them have turned into very solid prospects and I feel that Mackenzie is very similar to them.

Every year around a week before the draft, people begin to start bad mouthing certain players. I do not know if this is just a scheme to get a player to fall to the second round or what, but it is pretty bad.  Mackenzie Alexander is a good kid and a heck of a player, but others think he is too hard to deal with off the field.

Here is what Tony Pauline wrote about Alexander as well:

Despite his on-the-field talent, numerous sources have told me the junior cornerback is a very difficult person to deal with off the field. He was difficult at Clemson, and some of his coaches are giving Alexander less than rave reviews to NFL teams – and I’m being kind. This is something originally brought to my attention during Clemson’s pro day on March 10, and something I took with a grain of salt. But since last Friday, I’ve spoken with multiple sources, and it seems Alexander’s off-the-field personality has been spoken about at length in war rooms around the league. In my opinion, the junior cornerback has the best ball skills of any defensive back in the draft, but if he starts to drop deep into Round 1, or even out of the first frame altogether, it’ll be due to his off-the-field persona.

If this is true, I do not care. He is a stud on the field, and that is where I win games. I draft him period.