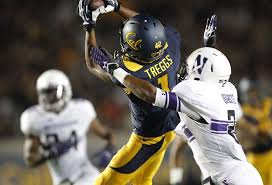 We are learning that Bryce Treggs one of Jared Goff’s favorite targets will be attending the Oakland Raiders and San Francisco 49ers local days next week on Tuesday and Wednesday.

Treggs is a 6’0 wide receiver from Inglewood, California.  Treggs tallied 195 catches, 2,506 yards receiving and 15 touchdown receptions to rank tied for third, fourth and tied for ninth on Cal’s all-time respective lists while his eight 100-yard receiving games are tied for fourth. He played in 46 games with 33 starts over his four seasons with the program from 2012-15 and was a two-time honorable mention All-Pac-12 selection of the league’s coaches as a 2013 sophomore and 2015 senior.