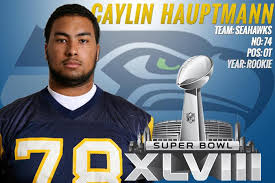 Immediately following high school graduation, Hauptmann accepted a scholarship offer to College of the Canyons, where he played left guard on the offensive line. After one season he transferred to Florida International University (FIU), where he became an immediate starter on the offensive line. He started every game during the 2012 football season, and finished his college career starting every game for a total of 37 games (over three seasons). Caylin Hauptmann helped pave the way for the FIU offense to have four 100-yard rushers, three 300-yard passing efforts and six 100-yard receivers in a season where the primary running back, and quarterback were out for multiple games with injury.

Former Patriots and Seahawks offensive lineman Caylin Hauptmann worked out for the Tampa Bay Buccaneers today, according to a source