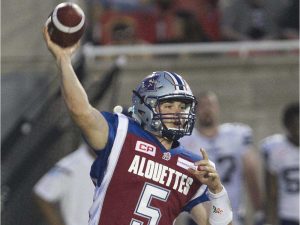 LeFevour recently played for the Montreal Alouettes of the Canadian Football League. He was drafted by the Chicago Bears in the sixth round of the 2010 NFL Draft. He played college football at Central Michigan University. Known as a dual-threat quarterback, LeFevour had the most total touchdowns in NCAA history until being surpassed by Case Keenum in 2011.

He has also been a member of the Cincinnati Bengals, Indianapolis Colts, Jacksonville Jaguars and Hamilton Tiger-Cats.

The Bucs have signed QB Dan LeFevour. Spent the 2015 season with the @MTLAlouettes.