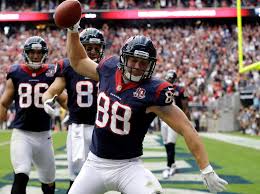 According to Ian Rapoport of NFL Media Insiders, the Denver Broncos are signing former Houston Texans tight end Garrett Graham. Graham played college football at the University of Wisconsin-Madison and was drafted in the 4th round of the 2010 NFL draft by the Houston Texans.

Graham played under Gary Kubiak in Houston, and will now reunite with him in Denver.

The #Broncos are signing TE Garrett Graham to a 1-year deal, source said. A familiar face for Gary Kubiak