#Broncos offensive lineman Tyler Polumbus has retired from the NFL 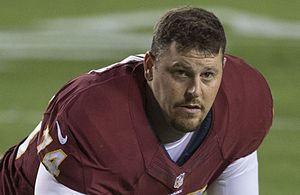 Today Tyler Polumbus the former Denver Broncos offensive lineman retired from the NFL. Polumbus posted this on his Facebook page.

“In 2008 Liz and I began the journey of a lifetime. 8 years and 4 teams later we feel that it is time to call it a career in the NFL. When this journey began I was just hoping that I could make the team with extremely long odds in front of me as an undrafted rookie. I thought it would be amazing to say that I played a season or two with the Denver Broncos. I never imagined that God would keep opening door after door for me to continue in this game. I am incredibly grateful for His mercy, grace, and blessings He has given my family.”

Polumbus was signed by the Denver Broncos as an undrafted free agent in 2008. He played college football at the University of Colorado at Boulder.

He has also been a member of the Detroit Lions, Seattle Seahawks, Washington Redskins, and Atlanta Falcons.