If #Broncos can trade Ryan Clady they can pay Kaepernick with no problem; #Titans should call 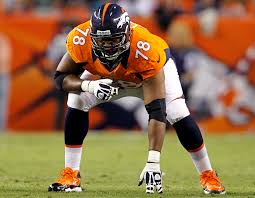 The good thing is Clady still has two years left on his contract, as well as 2018 as a UFA year.  This means the team could trade Clady to someone and get some compensation back as well as freeing up cap space. If Clady is traded the team would free up 8.9 million dollars in cap space.

So if the team was able to trade for Colin Kaepernick they would be able to pay him the money he is due.  The problem is the Broncos would lose their starting left tackle. The good news is the team just signed former Seahawks left tackle Russell Okung to a deal.

Clady played college football for Boise State University, and earned consensus All-American honors. The Denver Broncos chose Clady in the first round of the 2008 NFL Draft, and he has been selected for the Pro Bowl four times. If you are in need of an offensive lineman, why wouldn’t you trade for Clady?  I would be on the phone if I was a GM. He is only scheduled to make 10.5 million for the next couple years, which would be a steal.  Especially when Cordy Glenn was just signed to a Franchise tag that was 13 million.

Imagine if the Titans traded for Clady which allowed them to trade down and pick up more picks. The team would get a Pro Bowl caliber left tackle to protect their former first round pick in Marcus Mariota, and they can then stay put or trade out of the pick to pick up more talent.  If I was the Titans I would trade for Clady and then draft Jalen Ramsey with the first overall pick.