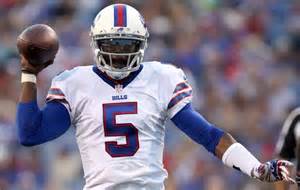 The Buffalo Bills gave Tyrod Taylor a chance to prove that he could be a starting quarterback in the NFL, and in his first year with the Bills he did well. He was able to beat out both Matt Cassell and E.J. Manuel. He ended up as a Pro Bowl alternative and made his way to his first Pro Bowl appearance. The Bills talked as if Tyrod Taylor was in their plans as a future franchise quarterback, but then his agent began to start talking trash.  Now the situation is a bit awkward. Tyrod’s agent called out the Bills and Rex Ryan’s team for them missing the playoffs.

Tyrod Taylor Agent @AdisaBakari: The #Bills didn’t go the playoffs last year because of discipline and the defense. TT was exceptional.

TT Agent @AdisaBakari: #Bills can do whatever they want but we hope soon they decide what they saw in ’15 is small sample of what he can do.

Taylor signed the initial deal with the Buffalo Bills that his agent was able to land him.  He came to Buffalo hoping to get a starting spot, he earned it and now the Bills are hoping to retain him, but after one year of starting in a system where Greg Roman made Colin Kaepernick look like a Super Hero, really should make you wonder about Taylor. Greg Roman is a system guy, and if the Bills make a long term commitment to Taylor and Roman or Rex Ryan end up leaving the team, what happens?  The Bills will fall back into the same problem they had with Chan Gailey and Ryan Fitzpatrick.  Hopefully they learned their lesson for that atrocious contract they gave FitzMagic.  The Bills are doing the right thing, draft a quarterback in the first or second round, and let him compete with Taylor. If he sits a year behind Taylor that is fine, but at worse you have something in case the Taylor situation gets worse.  The best part is the Bills have the Franchise Tag, and they could slap it on Tyrod.  At the end of the day though, his agent is not helping him, just hurting him.