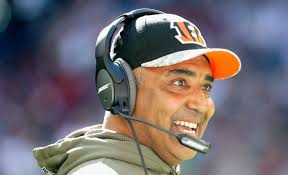 Bengals have signed Marvin Lewis to a one year extension

In 13 seasons, the Cincinnati Bengals have reached the playoffs seven times, won an average of about nine games each season, and won four division championships, under Marvin Lewis.

The team also has not won a playoff game, a drought dating back to the 1990 season. Before Lewis arrived, the franchise lost 10 or more games for five straight seasons. That miserable stretch expands to nine seasons of 10 or mores losses in the 12 years before Lewis.

Lewis is a very good coach had has implemented a system in the Bengals locker room that works. The Bengals would be dumb to let him go.  Just the other day a report came out that Bengals owner Mike Brown was growing frustrated with Lewis, but today the team gave him a one year extension which will last through the 2017 season.