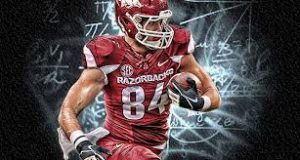 Bob McGinn of the Milwaukee Journal posted his break down of the top tight ends in the 2016 NFL Draft, and to no surprise Arkansas tight end Hunter Henry landed 18 of the the 19 first place votes leading all tight ends. Every scout was asked to list the top four players at the position.

One point short of unanimous, Henry totaled 75 points to 40 (one first) for Austin Hooper and 38 for Nick Vannett. Jerell Adams (20) was a solid fourth.