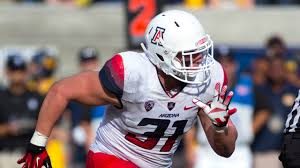 There are tons of players getting hype but one name you fail to hear about is Scooby Wright the linebacker from Arizona.  I am confused to why Scooby Wright III has not been getting love from around the web so I decided myself to talk about him.

Wright was simply the best defender in college football in 2014, winning the coveted triple crown of national awards: the Bronko Nagurski Trophy, Rotary Lombardi Award and Chuck Bednarik Award. The unanimous All-American and Pac-12 Defensive Player of the Year ranked among the top five players in the country with 163 tackles, 29 tackles for loss, 14 sacks and six forced fumbles, according to ESPN. He was a one-man wrecking crew.

Wright has been playing since a Freshman and while he has had a few injuries, this kid is talented. Wright is an underdog, he was a two-star recruit despite his successful high school career due to a perceived lack of athleticism, but still doubters of his ability to play in the NFL have not learned their lesson.

You do not hear about Scooby because he is not the biggest, fastest or strongest player, yet that is why I love him.  Wright is a tackling machine that dominates teams when he is on the field. Nothing is going to change folks, he is going to be in the running for Defensive Player of the Year as a rookie. Remember what I say, he may not be drafted early, but nothing in Scooby Wright’s past has been easy. He will have to earn the respect of others, and it will not change. He will continue to impress teams, you cannot teach heart and hunger, and Wright possesses both. Remember the name folks, he will be a Draft Day Diamond.