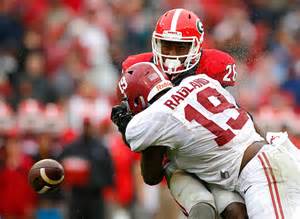 One of the best linebackers in the NFL Draft, was flagged by medical staff because he has an enlarged aorta.  Ragland is going to have to be monitored yearly for this problem. It will knock him down on some teams draft boards.

It is an enlargement of the aorta, which can occur in the chest or abdomen. Aneurysms are a concern because they weaken the wall of the aorta.

Sources: #Bama LB Reggie Ragland was flagged for an enlarged aorta, which requires yearly monitoring. Some teams have pushed him down a bit

According to seven teams, #Bama LB Reggie Ragland’s enlarged aorta is not expected to alter his football career. He just must watch it close