Could the Buffalo #Bills be interested in trading up to the 2nd overall pick for a QB? 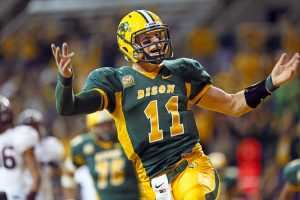 Could the Bills be in the hunt for Carson Wentz?

Could the Buffalo Bills make a move up to the second pick in the NFL Draft?  The Bills and the Browns have made a trade in the past, remember Sammy Watkins?  Well according to Benjamin Allbright the Bills have inquired about the 2nd pick.

San Fran, Dallas, Philly, NYJ & Buffalo all have looked into cost of moving up. Cost to move to #2 expected to be significantly less than #1

This morning on WGR, GM Doug Whaley did not deny that they inquired about the second overall pick, but did say if they felt a guy was there they would not hold back.

“We’ve proven in the past we’re open to do anything, If we believe that player is worthy of what we would have to give up to pick up the No. 2 spot in the draft, we’ve shown in the past we wouldn’t be averse to doing it.

“We’re prepared for any scenario. Wherever we pick and whoever we pick, we’ll have a plan devised for it.”

Bills GM Doug Whaley on rumors moving up to No. 2: “I just said that there’s always a possibility.” Said team has history of trading.