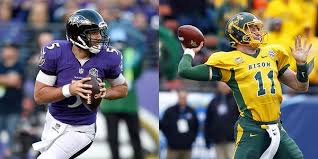 The 2016 NFL Draft is approaching and the Rams will hold the first overall pick.  The Rams will definitely be drafting a quarterback. The question is who?

Well when we look at the prospects, both Jared Goff from Cal and Carson Wentz from North Dakota State University are both very good.

Matt Ryan was drafted third overall in 2008, and he arrived in Atlanta with huge expectations. The Falcons, in the midst of their post-Vick, post-Petrino free fall, were desperately looking for a new face of the franchise. Ryan was that guy. And success came quickly. As a rookie, Ryan led the Falcons to 11 wins. (The season before, the Falcons went 4-12 with Joey Harrington, Byron Leftwich and Chris Redman throwing passes.) The conventional numbers are impressive 61 percent completion percentage, 3,440 yards, 16 touchdowns and 11 interceptions.

And while Ryan leading the Falcons to the playoffs made for a nice story, Flacco, drafted 18th overall in ’08, did the same, helping the Ravens all the way to the AFC title game. In fact, Flacco, who sported an 11-5 record, had similar passing numbers to Ryan. He completed 60 percent of his throws for 2,971 yards with 14 touchdowns and 12 interceptions.

Since then they have both been very good leading their teams to the playoffs, and both put up insane numbers. Flacco and the Ravens even won a Super Bowl. 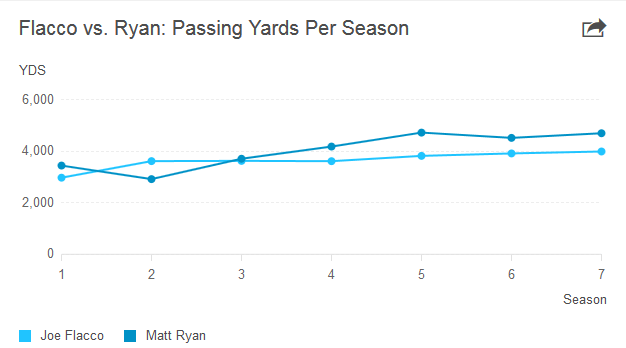 So many have been asking me who is better between Goff and Wentz, and after multiple hours of debating with myself, I have come to believe that both of these quarterbacks will be extremely successful. They are Matt Ryan and Joe Flacco 2.0.

Both Carson Wentz and Joe Flacco were small school quarterbacks that were overlooked by every major college, yet made the best of their careers. Both stand above 6’5, and have the deep ball touch.  Both Jared Goff and Matt Ryan were D1 players that are 6’4 and athletic to take off on you. I feel that Carson Wentz and Jared Goff are both great quarterbacks and should be 1/2 overall, but somehow I have a feeling the Browns will mess it up.