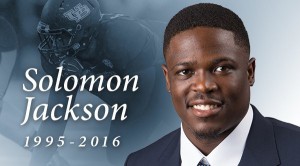 Today the University of Buffalo lost one of their football players. The school released this statement in regards to Bulls defensive end/linebacker Solomon Jackson who died last night at the age of 21.

Jackson’s passing came exactly one week after he experienced what was described as a “medical emergency”during a team conditioning session and was taken via ambulance to a local hospital.  He had been listed in critical condition since his hospitalization.

It is with deep sadness that I write to share that we have lost one of our own, UB football player Solomon Jackson, who passed away last night. Our heartfelt condolences and deepest sympathies go out to Solomon’s family as together we mourn his tragic and untimely death.

“From the outpouring of prayers and support over the past week since Solomon was hospitalized, it has been abundantly clear just how many lives he touched on a daily basis through his contributions and character—as an athlete, as a student, as a friend and mentor to others, and as an active and engaged member of our campus community. As a redshirt-sophomore defensive end from Stone Mountain, Georgia who was pursuing a degree in sociology, Solomon demonstrated tremendous promise as a student-athlete, both on and off the field.

“President Tripathi and I visited Solomon and his family early last week at the hospital, and from our visit it was clear Solomon was a young man of great character and integrity. He held these values at a very early age and brought them to all he undertook. He was active in his community and in his church—a genuinely kind spirit who was devoted to his family and to the well-being of people around him.

“All of us who had the pleasure and good fortune of knowing Solomon will remember him as a truly bright light on the field, in the classroom and around campus. We will remember him for his love of the game and his love of life. The best way we can honor his memory is for each of us to keep those values close in our own lives.

“As Solomon’s family prepares to make memorial and funeral arrangements, we will share more information as it becomes available. In the meantime, I know I am joined by Coach Leipold, the football staff and the entire Athletics family in expressing my deepest personal sympathies to Solomon’s family and friends during this incredibly difficult time.