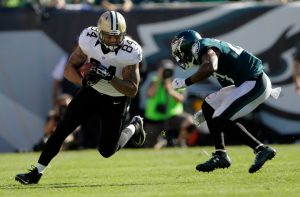 Saints have re-signed Michael Hoomanawanui to a three year deal

The New Orleans Saints have re-signed tight end Michael Hoomanawanui to a three year deal according to He was drafted by the St. Louis Rams in the fifth round of the 2010 NFL Draft. He attended the University of Illinois.

Hoomanawanui is the first of the Saints free agent tight ends to re-sign. Pending free agent Ben Watson and restricted free agent Josh Hill have not yet signed new deals.

Hoomanawanui was acquired in a trade with the Patriots this season in exchange for defensive lineman Akiem Hicks.

Hoomanawanui had 11 receptions for 76 yards and three touchdowns this season in 12 games. He was also used as an in-line tight end and a fullback.