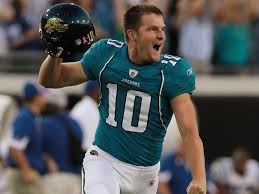 Excited to announce that I’ve signed with the New Orleans Saints! Pumped for this opportunity!

Scobee, 33, struggled in 2015. He was traded to the Pittsburgh Steelers last August but was released in October after missing four field goals from under 50 yards.

Scobee worked out for the Saints last month.