Report: Police are examining a knife found at O.J. Simpson’s house in 1998 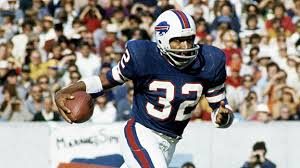 Former Buffalo Bills running back O.J. Simpson was acquitted for the murders of his wife and Ronald Goldman, but could this knife help Police solve a crime?

According a report from TMZ Sports, the Police are examining a knife that was discovered by a construction worker, who delivered the knife to a police officer who happened to be out on the street near the property back in 1998.

The police officer, who worked in the traffic division, kept it for years. In January, the now-retired officer contacted a friend in the homicide division and asked for the “departmental record” number for the murders of Nicole Brown Simpson and Ronald Goldman, so that the number could be engraved on a frame that was holding the knife.

The police demanded that the knife be surrendered, and it’s currently being tested for hair and fingerprints. Next week, it will be tested for DNA evidence and other biological material.

Regardless if it was the weapon that killed Ronald Goldman or Nicole Brown Simpson, O.J. cannot be tried for murder again, because he was acquitted once of the murders.  This is pretty interesting, you would have thought that the police would have looked closer to the surrounding areas, right…..