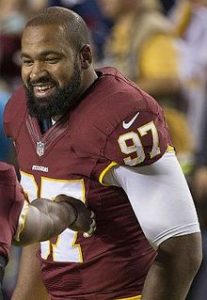 According to Rand Getlin of NFL.com, the Washington Redskins have released defensive lineman Jason Hatcher. Hatcher posted a message on his Instagram stating he was leaving, and now Getlin has confirmed it.

Hatcher was drafted by the Dallas Cowboys in the third round of the 2006 NFL Draft. He played college football at Grambling State.