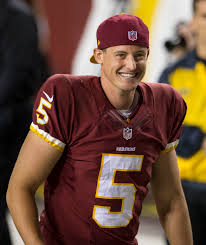 Redskins have placed a tender on punter Tress Way

The Redskins have extended inside linebacker Will Compton and punter Tress Way tenders for one-year contracts, according to the Washington Post.

A third-year pro out of Nebraska, Compton originally signed with Washington after going undrafted in 2013. He spent the bulk of that season on the practice squad before appearing in one late-season game. Compton contributed on special teams in 2015, and this season replaced Keenan Robinson in the starting lineup and never relinquished the job. He finished the year with 96 tackles, a sack and an interception while starting 10 games.

Way, meanwhile, is coming off of a second straight solid season, averaging 46.1 yards per punt, which ranked 12th in the NFL. He too is expected to sign his tender soon.