Report: Ravens have informed veteran DE Chris Canty they will not pick up his option in 2016 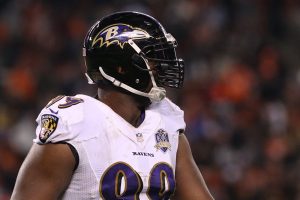 The Baltimore Ravens have released another players. According to Jeff Zrebiec the Ravens have told veteran defensive end Chris Canty that they will not pick up his option in 2016 making him a free agent.

Canty, 33, has spent the past three seasons with the Ravens, though his 2015 season was cut short by injury. Canty missed four games early in the season with a calf injury and then missed the final three games after going on injured reserve with a pectoral injury.

He finished the season with 20 tackles and one sack.

Ravens have informed DE Chris Canty that they will not be picking up his 2016 option, according to industry source.