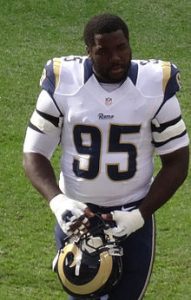 The Los Angeles Rams are closing in on a deal that will keep William Hayes on the roster.  Hayes was drafted by the Tennessee Titans in the fourth round of the 2008 NFL Draft. He played college football for Winston-Salem.

Hayes had quite the market, but may elect to stay at home with the Rams.

The #Rams are closing in on a deal to keep DE William Hayes, source said. That’s a key piece.

Updating: DE William Hayes back to the Rams. Done deal.