Raiders are the front runner for OL Kelechi Osemele; Vikings making a push 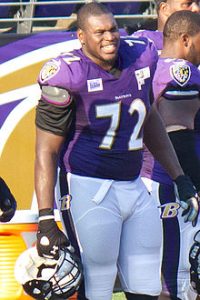 The Oakland Raiders are getting ready to spend some of their available salary cap, and it sounds like an offensive lineman is in the plans. According to Mike Garafolo of Fox Sports, the Raiders are expected to make a huge push to sign former Baltimore Ravens offensive lineman Kelechi Osemele.

Mike Garafolo is reporting that the Raiders are set to pay Osmele over 10 million per year.

Raiders making strong push for OL Kelechi Osemele. I’d call them the favorites. As I tweeted earlier, it’ll be for more than $10m per year.

In addition to the #Raiders, I’m told the #Vikings are surging for OG Kelechi Osemele. Expect his deal to land well in excess of $10M per.