#Raiders are finalizing a deal with OT Donald Penn 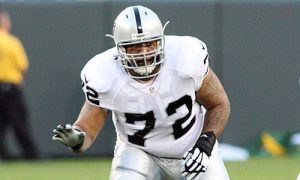 Raiders are finalizing a deal with OL Donald Penn

According to Vic Tafur the Oakland Raiders are closing in on a deal with their former offensive tackle. Penn was very solid for the Raiders last season and will now return to the stacked Raiders roster.

This is a great move because it truly solidifies the Raiders front.  Derrek Carr is a solid player and with the addition of Kelechi Osemele the Raiders are going to be a dangerous team.

Penn had a visit this week with the Giants, but it sounds like he will be a Raider again.