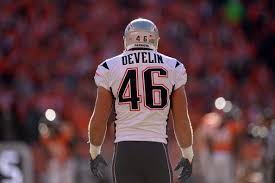 The New England Patriots have re-signed fullback James Develin to a one year deal according to Jeff Howe of the Boston Herald. He was a restricted free agent and this prevents them from having to tender him.

Develin has only touched the ball seventeen times in his entire career, but Tom Brady loves him.  Develin played college football for Brown University as a defensive end.

New England Patriots placed Develin on season-ending injured reserve last year after he broke his right tibia in a pre-season game against the Carolina Panthers.