#Panthers punter Brad Nortman is leaving Carolina for the #Jaguars 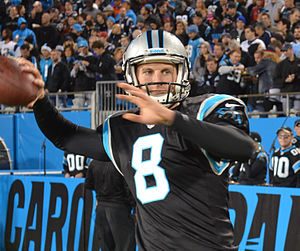 Panthers have lost punter Brad Nortman to the Jaguars

Rich Eisen is breaking news folks, yes that is true.  He is a huge fan of punters, and a punter for a team in the Super Bowl has a new team.  According to Eisen, Brad Nortman is leaving the Panthers for the Jacksonville Jaguars.

The deal is reportedly for four years. Nortman was selected by the Panthers in the sixth round of the 2012 NFL Draft, making him the first punter that the team had drafted in its history, as well as, being one of only two punters selected in this draft

Punters are Breaking News too: @BradNortmanisms about to bolt Panthers for Jacksonville, 4-year deal #PuntersAreTamperingWindowWorthyToo