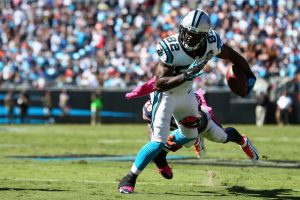 Panthers have moved on from WR Jerricho Cotchery

Carolina Panthers are moving on from wide receiver Jerricho Cotchery according to the Charlotte Observer. In 2015, the Carolina Panthers played in Super Bowl 50, Cotchery’s first super bowl. In a 24-10 loss to the Denver Broncos, Cotchery caught two passes for 17 yards and was credited with three drops, after having not dropped a pass the entire season.

Cotchery, who turns 34 in June, caught 87 passes for 1,065 yards and four touchdowns in two seasons with the Panthers.

Cotchery has also played for the New York Jets and the Pittsburgh Steelers. He played college football for North Carolina State University.