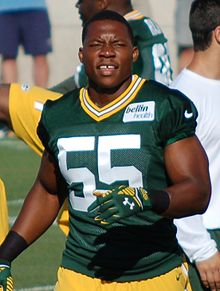 Packers linebacker Andy Mulumba is meeting with the Chiefs this week

According to Tom Silverstein of the Journal Sentinel in Milwaukee, former Packers linebacker Andy Mulumba visited the Patriots and will visit the Chiefs in the coming days.

Mulumba played college football for Eastern Michigan. He was drafted by the Winnipeg Blue Bombers second overall in the 2013 CFL Draft but subsequently signed with the Packers as an undrafted free agent.

Mulumba, signed as an undrafted free agent by the Packers in 2013, visited the New England Patriots Thursday and was on his way for a visit with the Kansas City Chiefs, a source close to Mulumba said. Other teams have inquired about Mulumba, but the Patriots and Chiefs have shown the most interest in the fourth-year linebacker.