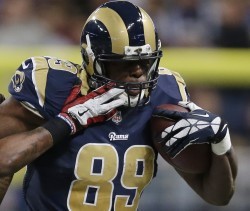 The Green Bay Packers have been interested in Jared Cook since last year, according to Rob Demovsky of ESPN.  The Packers hosted the former Rams tight end on the 14th of March and the Packers immediately made an offer to him.  Cook would garner interest from a couple teams like the Chicago Bears, Atlanta Falcons and Carolina Panthers, but luckily the Packers were able to get their man on a one year deal worth 3.6 million dollars.

According to Demovsky, The Packers’ interest in Cook dates to last season. They made an attempt to trade for him at the deadline last year but couldn’t get a deal done with the St. Louis Rams, who finally cut him after the season. The 6-foot-5 Cook played in every game last season but caught just 39 passes for 481 yards without a touchdown. He had two years left on a five-year, $35.1 million contract. For his career, Cook has 273 catches for 3,503 yards and 16 touchdowns and has missed just five games in seven seasons.