On Film Noah Spence is a first rounder, that is all that matters to me; MUST READ 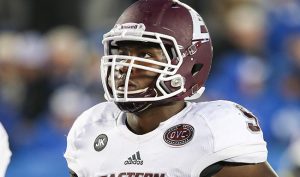 Eastern Kentucky pass rusher Noah Spence has been pretty up front about his situation all year, but media continues to criticize him

Our website is dedicated to the small schoolers and I am sick and tired of people trying to dog Noah Spence for everything. People are trying to just ruin his character now. I get that the kid has made mistakes, but guess what he has come clean.

He has admitted his problems, he has admitted he has made a mistake or two and over the past couple years at Eastern Kentucky he has been a class act.

I have talked to several people at the school including his teammates who say great things about him. I am sick of watching people bad mouth him and talk trash, because if you watch film (A SCOUT’S REAL JOB), then you will see he is a first rounder.

Here are a couple quotes from his teammate an opponent and his coach:

“Noah is the type of kid that really tastes it. He wants to be successful, and will do anything that a team asks. I love him as a teammate, he is a great person and someone that you can look up to as a younger player. He is willing to help you in the film room, and is like a big brother for the players under him.”

A coach said this:

“If you watch his film, he was the most dominate player in our conference. He is a solid edge rusher with great game speed and is a sound tackler.  Spence was never in trouble at Eastern Kentucky and was a class act while here.”

Spence did not have the best forty time at the combine running a 4.80, but people need to stop. People are saying he had the worst combine, and he is the biggest failure at the Combine.  The kid was suffering from a hamstring injury, and ran through it. Give him credit that he didn’t duck out like the others at the Combine. His Pro Day was yesterday and that is just a couple days from the Combine and guess who ran again?  Yep, Noah Spence.  He wants to prove he is a great player, but people need to stop harassing him.

Yesterday, Spence recorded times of 4.75 and 4.79 seconds in the 40, according to NFL Media senior analyst Gil Brandt, who spoke with a source who witnessed the workout. He also participated in position drills outdoors in cold conditions (39 degrees), but he stood on his numbers in the vertical (35 inches) and broad jump (10-1).

It was 39 degrees out and wet folks.  Yes Noah Spence HAD off the field issues, but if you never give him a chance to prove he has changed and matured, how can you expect him to prove his worth?  I want you to do one thing.  Go to our friends site DRAFT BREAKDOWN, and watch his film.

Stop reading about the kid, stop being bias, and watch his film. You tell me this kid is not a first round draft pick, and I will tell you, YOUR NUTS.