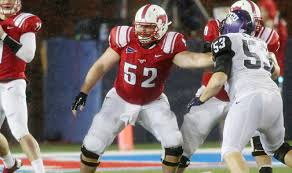 SMU center Taylor Lasecki plays with a mean streak. NFL teams will fall in love with his passion for the game

This past year, I had the opportunity to go to the Children’s hospital in Dallas on three separate occasions. It is always fun to go and draw or play video games with the kids. Not only do the kids love getting a chance to interact with football players, but it also really brightens up your day to see the excitement and happiness in the kids. It really puts everything in perspective when you get a chance to interact with families that are positive and upbeat even though they are going through tough times.

I graduated SMU with a degree in Philosophy and a minor in Political science. Two of the tougher classes I took were Criminal Process Rights and a class on Metaphysics. The Criminal process rights class was basically an undergrad law class and was very tough. I love philosophy, so the metaphysics class was difficult but I really enjoyed the things we talked about in that class.

I was born in Seattle but have lived in Denver, Atlanta and now Frisco, Texas. I have been in Texas for around ten years now.

My father is definitely my role model. He grew up on a farm in Krakow, Wisconsin with 11 siblings. His family didn’t have much and it was extremely hard for him growing up, but he worked and found a way to better himself. He joined the Air Force and worked hard to provide a better life for my brother and me than he had growing up. I owe all of the opportunity and fortune I have had in my life to him. As a single parent it can be hard to raise two kids, but he has been a better father than I could ever ask for.

I actually didn’t start playing football until 8th grade. Before that I only played baseball. I always wanted to play in the Major Leagues but at 300 lbs I figured that probably wasn’t going to happen.

One of the biggest things is my understanding of the game. As a center in June Jones offense, I was tasked with calling out every protection based on where I thought a blitz would be coming from. I was required to understand coverages and how they match up with our personnel packages in order to put us in the best protection. I had two coaching staffs at SMU with two different offenses so I have the ability to learn and adapt pretty well. I have also shown the ability to move seamlessly from center to guard so I am not just a one-dimensional player. In my career, I have kept mental busts to a minimum. I am extremely durable and only missed one start out of 49 in my career. I can play through pain and come to get after it every day.

As a center, one of the biggest things I need to know is the other teams blitz tendencies. It is important to recognize these early so you can get the protection adjusted to whatever the defense is bringing. As for personnel, I mainly want to see what style of rusher I’m facing. Does he speed rush and use quick moves or does he bull and rip? How does he align when he does this? Does he tip his moves anyway so I might be able to predict him and catch him off guard.

Andrew Billings. He is a great player. There is a reason he is projected so high in the draft. I played against him twice.

Corey Linsley. He is about the same size as I am. He is strong/physical and dependable. He doesn’t make a lot of mistakes and he seems like a very smart player.

My parents are divorced so going through that was tough. My mother struggles with substance abuse and has been in and out of my life. I haven’t had a relationship with her since high school and it can be tough only having one parent in your life. Luckily, the rest of my family is great and supportive so it makes it easier to deal with. 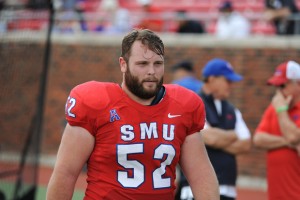 There is a certain way and order in which I have to put all of my pads and uniform on. One of the big things SMU did last year was hire a mental conditioning coach. He taught us a couple mental exercises and I would try and go though those before the game to get my mind ready.

I am a dependable player who works hard to better myself everyday. Your organization will be proud to call me a member.

I love the Green Bay Packers. My dad is from Green Bay so they are a big deal in my house. My favorite player of all time is Brett Favre with out a doubt.

I’m a pilot and I love flying, so that would definitely be a used, small single engine aircraft (Cessna). They cost about as much as a new car.